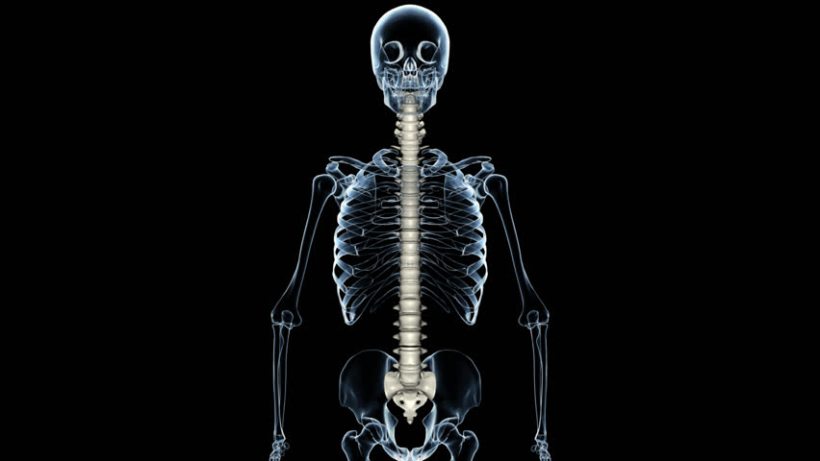 This is another long post – but I have never been known for my ability to tell a long story short, so no apologies there – but more so, it’s also very brutally honest. When I decided to start this blog, my core purpose was to keep a journal of my injury, my rehab and what I learn along the way. Something to assist the healing process.  So beating around the bush would defeat the purpose entirely. You won’t find me sugar coating anything here, it’s simply not who I am. What you will find, however, is a raw account of what this experience has been like for me – the good, the bad and the ugly. On that note, I encourage you to read at will….

Originally, I had planned to base my second blog post on the differences in my experiences between my first microdiscectomy and the most recent. The main difference, I had thought, was the use of opiate pain medications in the lead-up, during and after the first surgery versus a more natural approach to therapy throughout surgery two. My story was going to be a jubilant one – explaining how I managed to change my approach to therapy and proved that management of chronic pain, and rehabilitation post-surgery could be done without a focus on opiate or synthetic medications. However, my experiences over the last five or six weeks has changed the direction I thought this post would go.

Having managed ten months of chronic pain through physio, Pilates and Feldenkrais instead of pain-killers, I found that my body bounced back from the second surgery within the first three weeks. Every effort spent to improve strength and movement as a mechanism for pain relief seemed to be money in the bank for recovery. It was coming along nicely I found myself up and about, running errands and getting out of the house. I was out walking – albeit slow and steady – but this was in stark contrast to my progress after surgery one. 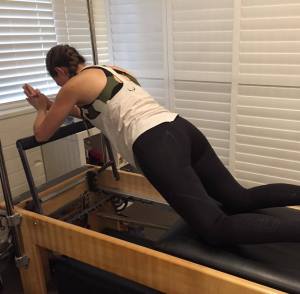 ABOVE: I have found reformer pilates an excellent tool to gently improve strength in the core, gluts and thoracic; as well as increase mobility in the recovering vertebrae. The professional crew at Physio Sport in O’Connor, ACT have been writing and updating reformer programs for me since before my surgery.

Those who know me will tell you that I’m not one to take it slow and I’m not one to do things by halves, even when I’m telling myself I am – a bit like my ability to write a short blog post. I push myself above the average without even realising. Obviously somewhere, somehow, by week four post-surgery I had over-estimated my body in its recovery, and consequently had to pay for it. By week four the muscles down the left side of my spine had ceased, making it difficult to stabilise or weight-bare. 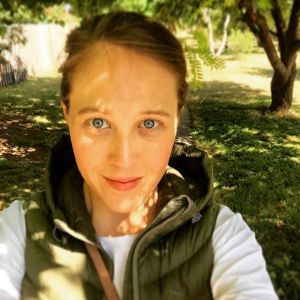 RIGHT: @caityleidoscope: “Am still slow and 1/3 of my pre surgery walking distance. But I’m told to take each step with mindfulness and purpose – am working on changing my neural pathways to recruit the correct muscles in each basic movement.”

My GP (whom I trust) put me on a strong muscle relaxant – much like Valium – with the message that it was imperative for my body to be comfortable during this period so that my back could heal. Rest was the number one priority. So here I was at week four, propped up with pillows in my bedroom, with the window open and warm summer breeze rolling over me. The sweet smell of the flowers blooming on the lemon tree outside, incense burning on the tall boy whilst sucking purposefully on a frosty fruit, all before 10am. Without a shadow of a doubt I was high as a kite. This was exactly how my GP told me I would be. I was happy as Larry on these pills, thinking that after a few days I’d be up and about again – back on track. But little did I realise just how much taking these pills would throw my natural approach to rehab off-track. In retrospect, I felt like I should’ve known better.

At the time of the initial injury my GP (who I no longer see) prescribed me with morphine-based pain-killers and anti-inflammatory medications to numb the pain. I was on these medications for about 9 months before the first surgery. Anyone who has ever had a major surgery will understand the effects of painkillers like Endone and Oxycodone – they are generally prescribed to numb pain initially felt after surgery. Endone is fast-release, designed to provide pain relief for acute aches and pains. Oxycodone, is slow release, keeping the patient pain-free throughout the day.

Throughout the extended period that I was on these meds, I had little energy or appetite for food and I was sedentary most days. My body wasn’t getting the essential nutrients it needed to function, or to heal. When it came time to have surgery I had lost a huge amount of weight – including muscle – and my body was in no state to spend the energy required to recover. My body was at a significant disadvantage from the start.

After my first surgery, everything unfolded very slowly. For the first three weeks, I was so weak that I couldn’t shower, go to the bathroom, dress myself or even get out of bed without assistance. And that was even before deep vein thrombosis (DVT) developed in my right leg. The DVT meant that I had to stay sedentary for up to six weeks, putting recovery for my back injury on the back-burner. So I continued on a plateaued trajectory of improvement for several month. I remained on opiate pain-killers for about 6 months after the surgery, and looking back, not only did my body suffer physically from malnutrition, but I suffered more than I realised from withdrawal systems when I eventually stopped taking them.

The secret to bouncing back so quickly after my most recent surgery, I think, was the conscious change in my approach to natural rehab such as physio and Pilates.  Until recently, I had undertaken numerous years of movement therapy by conducting movements repetitively without any awareness of the connection between my brain and the recruiting muscle.  This turned out to have huge ramifications,  for example, every rotation in a pedal stroke when I was cycling was unconscious, habitual, and as it turns out, bad for my body. I suffered numerous injuries whilst training on the bike as a result of unconscious movement. However, a radical change occurred mid-last year when I became a student of Feldenkrais.

Feldenkrais is a methodology based on building kinaesthetic awareness. Through building awareness of the relationship between mind and body, the idea is that once becomes conscious of the discreet purpose of each movement. For example, conscious awareness of the muscles recruited for every pedal stroke on the bicycle, or each step taken on a walk.

“Feldenkrais is a methodology based on building kinaesthetic awareness. Through building awareness of the relationship between mind and body, the idea is that one becomes conscious of the discreet purpose of each movement. For example, conscious awareness of the muscles recruited for every pedal stroke, or each step taken.”

While trying to manage the chronic pain from the most recent back injury, the biggest improvements in my strength and movement occurred when I started learning the core teaching of awareness through movement through Feldenkrais. Developing an ability to connect with, talk and listen to, parts of my body, has become key to both managing pain as well as rectifying the poor movement patterns that I developed from the initial injury.

In the book ‘The Brain’s Way of Healing’ by Norman Doidge, he discusses the principals of Feldenkrais, one being that awareness of movement is key to improving movement:

“The sensory system, Feldenkrais pointed out, is intimately related to the movement system, not separate from it. Sensation’s purpose is to orient, guide, help control, coordinate, and assess the success of a movement. The kinaesthetic sense plays a key role in assessing the success of a movement and gives immediate sensory feedback about where the body and limbs are in space. Awareness of movement is the fundamental basis of Feldenkrais’s method…”

Depletion of the sensory systems are accepted as a side effect of muscle relaxants seemingly without proper consideration of the impact this could have on long-term recovery. During the five weeks in which I was taking the muscle relaxant medications (on top of a low dosage of slow release pain killers), I was barely aware of the time, let alone the day, whether I had showered (or how long since I’d last showered), and not to mention the incessant symptoms of depression and anxiety I experienced. There was no way I was capable of conscious movement during this time. In fact, it’s only now at week nine that I am beginning to re-establish a basic awareness of my movement. 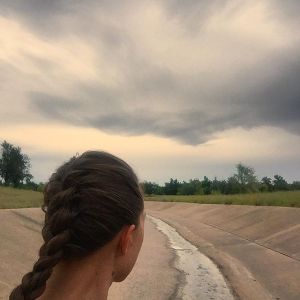 LEFT: @caityleidoscope: “This is me in a storm water drain. Also I read something great today:
” Physical fitness is the first requisite of happiness. Our interpretation of physical fitness is the attainment and maintenance of a uniformly developed body with a sound mind – fully capable of naturally, easily, and satisfactorily performing our many and varied daily tasks with spontaneous zest an
d pleasure. To achieve the highest accomplishments within the scope of our capabilities in all walks of life we must constantly strive to acquire strong, healthy bodies and develop our minds to the limit of our ability.” — Joseph Pilates”

It wasn’t just the loss of awareness that caused my set-back. In fact, this was only a minor side effect.